Double Indemnity is an exciting tale of seduction, greed, murder, and betrayal, in which an insurance salesman tries to help a young woman murder her husband for the insurance money. The story is based on actual events.

This is one of those movies that is loved by critics and film buffs, but often overlooked by regular viewers. For many years I had noticed it on those (rather morbid) “100 films to see before you die” lists, and it was usually the highest ranked film that I had never seen. Even though I have no plans to die any time soon, I recently decided it was time to rectify this omission, and I am glad I did. I loved it.

It is a carefully stylized movie, well paced, with some great scenes of suspense, and some moments of dark humor. It is old fashioned, but in a good way, and it is also exciting and fun. I recommend it to you whether you think you are about to die soon or not.

Click below to watch the trailer for Double Indemnity:
(If you cannot see the trailer below, your browser may need adjusting)

Double Indemnity begins with Walter Neff (Fred MacMurray), an insurance salesman, staggering into to his office building in downtown Los Angeles late one night. Neff, clearly in pain, sits down at his desk and begins his confession into a Dictaphone.

Neff tells of the time he first met the seductive Phyllis Dietrichson (Barbara Stanwyck) during a routine house call to renew an insurance policy for her husband, and the pair were soon flirting with each other. When Phyllis started asking questions about how she could take out a policy on her husband’s life without him knowing it, Neff realized she intended to murder her husband.

Strangers on a Train

At first Neff was shocked by the idea, but soon they were plotting to kill her husband together. Neff told Phyllis about the ‘double indemnity’ clause in the insurance policy, which said that under certain circumstances the insurance company would pay twice the normal amount. Because of this, they came up with a plan which involved Neff assuming the husband’s identity, to make it look as though he fell from a train.

The murder went ahead as planned. However, Neff’s colleague Barton Keyes (Edward G. Robinson), suspected foul play, and became convinced that the Phyllis and an unknown accomplice must be behind the husband’s death.

Neff was approached by Lola, the victim’s daughter. She told him that she was convinced that her stepmother was behind her father’s death, because Lola’s mother also died under suspicious circumstances when Phyllis was her nurse. Realizing that Phyllis was even more ruthless than he had first thought, Neff started to feel guilty about his part in the murder, and to feel sorry for Lola.

Then he learned Phyllis had been seen with Lola’s boyfriend. He began to suspect that he too had been used, and confronted Phyllis at her home. This confrontation ended with Phyllis shot dead, and Neff wounded.

Neff drove to his office where he dictated his full confession to Keyes. This brings us back to the beginning of the story. Keyes now arrives says he has overheard the confession. Neff announces to Keyes that he is going to flee to Mexico, but collapses before he leaves the building. Keyes, his old friend, was by his side when he died. 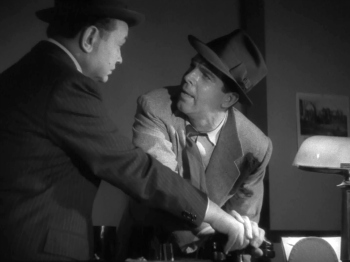 His addiction to chatlines was becoming a real problem.

When I was a kid there used to be a lot of comedy sketch shows on TV that spoofed film noir. So much so, that I realized while watching Double Indemnity that I have probably seen more noir spoof over the course of my lifetime than I have seen actual noir movies. For this reason, it felt at first as though I was watching a comedy, and I kept waiting subconsciously for a punchline that never came. When Edward G Robinson came on screen it got worse – I don’t think I had actually seen him in a movie before, but I recognize him from caricatures in Warner Bros cartoons I watched as a kid, and also, his voice was the inspiration for Chief Wiggum in the Simpsons.

Eventually though, I came to terms with the fact that Double Indemnity was a thriller, and it was indeed pretty thrilling. The murder was really well handled – with suspense that Hitchcock would have been proud of. The tension starts with Neff hiding in the back of the car (I was actually worried he was going to get motion sickness and give the game away by throwing up). Then the scenes on the train are pretty nail-biting. Finally, the scene when the getaway car won’t start was almost unbearable – it was such a relief when the Fonzie technique actually worked.

Femme fatale Phyllis (the alliterative leading lady) turned out not to be all bad after all, but what of our charming/sleazy anti-hero Neff? I couldn’t decide whether I liked him or not, but I definitely liked the way he lit his matches. Where can I find matches like that?

They took their games of hide-and-seek very seriously.

Back to Film Noir