The first ever horror movie was an 1896 silent short film called “Le Manoir du Diable” and it was, of course, about a vampire. This was followed by other successful silent movies like The Cabinet of Dr. Caligari (1920), Nosferatu (1922), The Hunchback of Notre Dame (1923), and perhaps the first great horror movie The Phantom of The Opera (1925) with Lon Chaney.

The very first horror movie with sound came out in 1931; it was Universal Studio’s “Dracula”, starring Bela Lugosi. While this was perhaps not the greatest vampire movie ever (it is based on a stage play, and lacks flair) it ushered in the golden age of gothic-steeped movies from Universal Studios that so many fans of classic horror movies (myself included) still love today – including Frankenstein, The Wolf Man, and The Mummy.

After the golden age of the 1930s-40s, horror movies declined in popularity for a while, until Hammer Studios in England revived them in the 1950s, bringing in blood and sex, and introducing great stars like Christopher Lee and Peter Cushing.

Before long horror was everywhere again. The 1960s-70s saw the emergence of new genres such as slasher movies, zombie apocalypse, occult movies, and body horror.

Here on this page we recommend our favourite old scary movies from the golden age, and from the early days of the 1950s-60s revival when the movies were still being made in black and white. A lot of people think that most black and white horror movies would struggle to frighten a modern seven-year-old, and while that might be true for a lot of classic horror movies, be warned – one or two of the movies on the list below are most definitely not for children!

The Invisible Man
The story of a brilliant scientist who defied the laws of physics, and also defied several other laws about not killing people. An adaptation of H.G.Wells’s novel.

Cat People
What is it that separates us from the animals?
Well usually, it’s a cage.Not in this movie though. 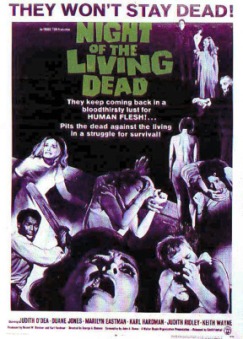 Psycho
Janet Leigh embezzles money from her employer, and goes on the run.  She stops at the Bates Motel, run by a young man and his domineering  mother – and mother isn’t happy about it!

Les Diaboliques
The story of Les and his unfortunate surname.Not really.  It’s a horror/thriller from “The French Hitchcock” about two women who plot against a sadistic headmaster. 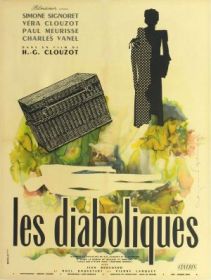 The Cabinet of Dr Caligari
An homage to Expressionism from the silent era.  Perhaps the first full-length horror movie, and still effective today.

Dead of Night
A group of strangers swap ghost stories in an old farmhouse, but one of the guests believes there really is something supernatural afoot. The stories include tales of a haunted mirror and an evil ventriloquist’s dummy.

Night of the Demon
This little British movie about an investigator who has a hex placed on him by an occultist is very popular with critics despite having special effects that would have made Ed Wood cringe.It was released in the States as Curse of the Demon

The Scariest Movie Ever

Do you want to know which movie terrified audiences more than any other? You’ll never guess what it is.  Click here