The Cabinet of Dr Caligari is a fascinating German silent film, often regarded as the first ever full-length (although it is only about an hour long) horror movie.  The story, about a deranged doctor who hypnotically controls a murderous sleepwalker, is engaging enough, but what makes it so interesting is the way the film looks – stylized sets, outlandish acting,  and unrealistic theatrical effects that caricature reality.

If you are planning on watching this movie for the first time, take care which version you watch.  The first video and dvd release of the movie is was in black-and-white, and had some scenes played at double speed, meaning that the running time was only 51 minutes. The picture quality of this version is quite poor. A later restored version had better picture quality, a choice of soundtracks (I prefer the modern one) and some colour-tinting. The whole film plays at regular speed, and has a 69 minute running time.  This version also restores the original title cards, in a strange and unnerving font. However, in 2014 the movie was released in a 4K resolution restoration – the “definitive version”and is now available on Blu-ray. 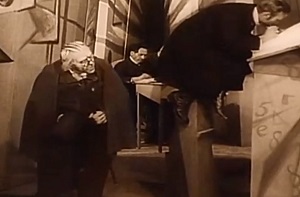 Tragically, ergonomics was invented too late to save this young clerk.

Francis, a young man, is talking to another man about his experiences with the sinister Dr Caligari, and the movie shows us this story in flashback.

Dr Caligari comes to town with a travelling fair. He has a show to put on, so goes to the Town Hall to apply for a permit, where a clerk treats him rudely.  The next day, the clerk is found murdered.

Later, we see Dr Caligari putting on his show.  In his tent he has a coffin-like cabinet, which contains a sleeping man.  Calgari says the man is called Cesare, a somnambulist (sleepwalker) who has been asleep for 25 years.  Bringing the somnambulist into a trance-like half awake state, Caligari tells Cesare to predict the future of a man in the audience (Francis’s friend, Alan), and Cesare says that the man will die before dawn.  The prediction does indeed come true, because Cesare sleepwalks out at night and kills him.

Suspicion inevitably falls on the doctor and his eerie accomplice, but a copycat killer strikes, and is caught, and the police are temporarily fooled into thinking that Caligari and Cesare are innocent.  Young Francis however, suspects the truth, and he and his fiance Jane begin to investigate the pair.  This provokes Dr Caligari to order Cesare to kill Jane, but even in a trance Cesare cannot bring himself to kill one so beautiful; he kidnaps her and carries her off, but eventually he himself dies of exhaustion.

Francis traces Caligari to a mental institution in the next town.  Forcing his way in, Francis is shocked to discover that Caligari is not, as he had expected, a patient there, but he is in fact the director.  He learns that the director is obsessed with the story of an 11th century monk called Caligari who controlled a murderous somnabulist, and he is re-enacting that legend.  When Francis exposes the doctor’s crimes, and tells Caligari that Cesare is dead, the doctor goes beserk, so the staff tie him up in a straight jacket and imprisoned in his own asylum.

Francis finishes telling the story, and the flashback ends.  However, in a final twist, the movie reveals that the flashback was in fact actually a fantasy, and the truth is that Francis, Jane, and Cesare are all inmates in the asylum, and the mild-mannered and decent Calgari is their doctor.

Cesare. The first goth. Or was he Emo?  I can’t tell any more.

Cesare’s appearance profoundly disturbed viewers at the time, but it is unlikely to trouble modern viewers who grew up in a world in which “The Cure” regularly appeared on Top of the Pops.  Far from being scared while watching him, I found myself yearning for the nightclubs I used to go to in the 1980s. I had a friend once who was a goth;  I did admire his black hair and bangles, but I felt sorry for him in summer, wearing in his long leather coat and wishing he didn’t think he was too cool for shorts and a T shirt.  Poor sweaty goths.

Far more chilling than Cesare, I thought, was Caligari himself.  He looks exactly like the sort of person parents tell their children to stay away from.  The sort of person that Operation Yewtree would want to have a long chat with.  If the “25 years” claim was true, Caligari must have taken Cesare when he was a child.

I did enjoy this movie.  It is a very old movie indeed, and I hope I am still interesting when I am nearly a hundred years old.

The strikingly cramped and crooked look of the town of Holstenwall was inspired by the work of the great “Expressionist” painter Edvard Munch.  Stylistically, The Cabinet of Dr Caligari is unique, as none of the other homages to Expressionism which were made around the time have survived.

Did you notice that the outlandish set designs were present in the main story, but not in the bookends featuring Francis at the asylum.  This was a clue to the viewer that the story was a fantasy – a technique also used to great effect in The Wizard of Oz (which also borrowed the idea of the narrator imagining a story incorporating characters from everyday life) nineteen years later.

Don’t ask me what painting triangles in a prison is supposed to “express”. I’m a movie critic not an art critic.

Back up to Classic Horror Movies