This macabre classic is an adaptation of the novel “The Invisible Man” by H.G. Wells, and a reasonably faithful one.

It is the story of a scientist who has discovered a formula to turn himself invisible, and now he wants to find a way to turn back again.

It stars Claude Rains as Jack Griffin (well, the voice of Jack Griffin anyway) in his first American screen role. It was directed by the great James Whale, of “Frankenstein” fame.

The Invisible Man is an enjoyable movie which is at times exciting and at times funny – and the special effects, which are not over-used, are surprisingly effective.
If you have seen it:
Scroll down past the trailer for more.

Click below to watch the trailer:
(If you cannot see the trailer for The Invisible Man below, your browser may need adjusting)

A stranger, his face wrapped in bandages and wearing dark glasses, arrives at an inn and demands a room. 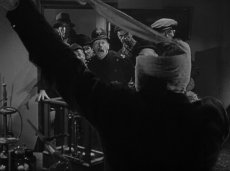 It is Jack Griffin, and we soon learn that he is a scientist who has perfected a way of making himself invisible, using a (fictional) chemical called monocaine. However, a side effect of the process seems to be that is has made him become psychotic. In his room he continues his experiments to try to find a cure, but his rude behaviour soon angers the innkeeper, who tells him to leave. Griffin flips, removes his clothes and bandages, and runs around the town invisible, laughing manically, and terrorising the locals.

While the police are searching for him, Griffin visits his old friend and colleague Dr Kemp. He tells Kemp that he will be his partner in crime. At first, Kemp goes along with this, helping to recover Griffin’s notes from the inn, but eventually he contacts Griffin’s mentor, Dr. Cranley, and the police.

Dr Cranley’s daughter, Flora, is Griffin’s fiance. She arrives with her father to talk to Griffin, but the police soon turn up and Griffin realizes he has been betrayed. He vows to kill Kemp at 10pm the next night, and then disappears.

Knowing his intentions and where he will be at the designated time, the police plan to trap Griffin, but they fail, and he does indeed murder his old colleague.

Griffin then goes on a murder spree – he even causes a terrible train crash. Eventually though, he is trapped in a barn, surrounded by police. Trying to escape, his footsteps in the snow give away his position, and he is shot.

Griffin is taken to hospital where, on his deathbed, he shows remorse. The effects of the monocaine wear off as he dies, and he becomes visible once again.

I loved this movie, despite the fact it features the most annoying character in the whole of movie history – the innkeeper Mrs Hall, played by Una O’Connor.

Anyone who thinks Jar Jar Binks might be the worst character ever should watch The Invisible Man before coming to a final decision. Una’s hysterical screaming and terrible acting was so bad, I found I could not take my eyes off her. Una was also annoying (basically playing the same role) in The Bride of Frankenstein. This was also directed by James Whale, so I guess he must have thought she did a good job. I do not understand how this can be possible – if Whale was not gay, I would assume she was sleeping with him. I guess we can rule that one out though, thank god.

One thing I do like, is the way they gloss over the “science” in old science fiction movies. In The Invisible Man, we are told that the reason Griffin is invisible is because of an injection from an exotic plant extract. When the scientists hear about this, they just accept it. What they actually should have said was:

“Hang on a minute, even if Griffin lost his color we would still be able to see him – the same way that we would see him if he were made of glass, or water.”

“How does that work? Surely that contradicts several things I learned in scientist school.”

…but they don’t. I suppose we should be grateful they don’t scream and jump onto the table.

I know it sounds like I am complaining, but I really enjoyed this movie, and these little quirks made it all the more fun for me. I loved the special effects too – weren’t they so much better than you were expecting? 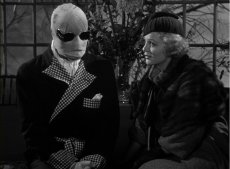 She had a sinking feeling about their relationship.

Aside from Una O’Connor, The Invisible Man has two more actors in it who went on to bigger things -Claude Rains famously went on to be a big star, and had a major role in Casablanca, but Gloria Stuart, who played Flora, went a step further. It really would not be an exaggeration to say that she played, later in her career, the main character in the biggest movie of the 20th century. I bet you didn’t recognise her though did you? Got it yet?

First rate direction from Whale. Rains, with his silky, slightly superior-sounding voice, make Griffin emerge as pathetic rather than grandiose. Meanwhile the dialogue (by Philip Wylie and R.C.Sherriff) is by turns hilarious, haunting, and horrific.

At one point in the movie, Griffin makes the claim that “an invisible man could rule the world!”. I am not sure what the thinking was behind this statement – why did he think that the inhabitants of say, Bulgaria, would submit to his rule? In fact, it is difficult to see how he would even go about becoming ruler of Britain – the British would be unlikely to appoint someone leader just because he threatened them with terrorism, and even if they did I suspect they would nab him as soon as he turned up for Prime Minister’s Question Time. Or maybe he intended to use the democratic process and thought his invisibility would be a vote winner? Either way I think his claim was extremely rash, and that “world leader” was not a suitable career path for him to embark upon. Here are some more: