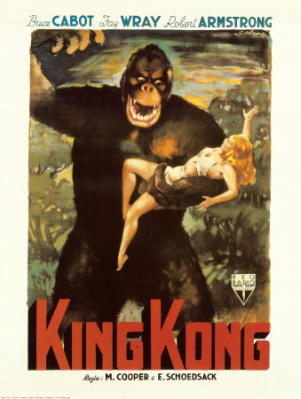 The original King Kong is a fun exciting monster movie, the result of a collaboration between co-producers and directors Merian C. Cooper and Ernest B. Schoedsack (both real-life adventurers and film documentarians) and special effects genius Willis O’Brien.

Fay Wray stars as Anne Darrow, a penniless New Yorker who is persuaded by the smooth talking Carl Denham to star in a movie filmed on a mysterious island in the Indian Ocean. Once they reach the island though, they find themselves fighting off dinosaurs, sea monsters, hostile natives, and the giant gorilla Kong.

King Kong was a huge hit in 1933, breaking box office records, and was re-released many times. It was remade in color in 1976 starring Jessica Lange and Jeff Bridges, to mixed reviews. It was remade again more successfully in 2005 by Peter Jackson (director of The Lord of The Rings), this time with a record-breaking $207 million budget. Peter Jackson was famously a huge fan of the original movie, and this shows – his remake is virtually a homage to the 1933 version. Many scenes and sets are faithfully reproduced, and the resemblance between Faye Wray and Naomi Watts is quite striking. Fans of the recent remake will find much to enjoy in the original.

Click below to watch the trailer.
(If you cannot see the trailer below, your browser may need adjusting) 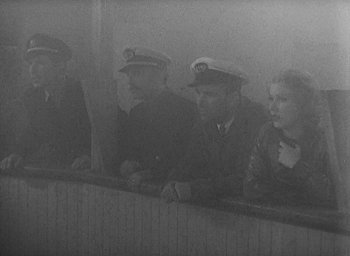 Life before the smoking ban.

Anne Darrow is penniless and desperate when she is recruited by film maker Carl Denham to star in his latest movie, and she sets sail with him aboard the SS Venture to a mysterious island in the middle of a fog bank in the Indian Ocean. During the course of the voyage, Ann falls in love with First Mate Jack Driscoll.

When they arrive at the island Ann is kidnapped by the natives, and prepared as a sacrifice to King Kong, a giant ape who lives in the jungle on the island. Kong carries Ann off to his lair, and appears to fall in love with her.

Driscoll, Denham, and the crew set out to rescue Ann. They encounter savage dinosaurs on the journey and many men are killed. Eventually, they rescue Ann, and capture Kong, subduing him with gas bombs.

Denham returns to New York, taking Kong with him. He puts Kong in a stage show, billing him as the eighth wonder of the world. The giant ape escapes however, and recaptures Ann. He carries her to the top of the Empire State Building, where he is attacked and killed by a squadron of military airplanes. Ann and Driscoll are reunited.

Kong sensed from her reaction that it was going to take more than his clean teeth to impress her.

I thought this would be a good movie to watch with my children (age 6 and 7). I loved it, but they were less impressed – too young, I now realize. It did not get off to a good start- the “Eighth Wonder of the World” reference in the title sequence prompted questions about what the other seven were, which of course I could not remember. As a result of this we were distracted when the film started properly, and we missed the opening scene which appeared just to be two middle aged men having a stilted conversation in a gloomy harbour and not knowing what to do with their hands. I suppose we could have rewound the DVD (do you rewind DVDs?) but I figured that we would soon catch up. Anyway, I had promised my children exciting scenes with monsters and dinosaurs, but unfortunately they got bored and wandered off before the first monster appeared. 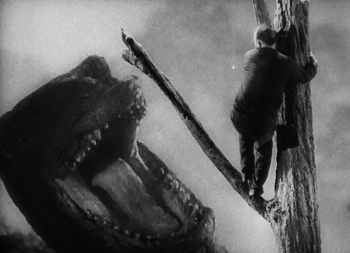 It could be said that anyone who climbs 20′ up a tree to escape from a 30′ tall monster deserves to get eaten.

Their loss I think. I first saw this movie when I was about ten, and I remember really enjoying it. Watching it as an adult, I was fully expecting to be disappointed, but instead I was really impressed with the standard of the stop-motion effects. Kong’s movement was quite convincing, and his personality really came through. It could so easily have been done badly, but you can see how much care and love the film-makers put into it. It is a shame that the full size model of the head they also built was not as good – the mouth and teeth were all wrong, and he always looked like he was smiling a little too knowingly.

Actually, before she ran off to “do her Spanish homework” (i.e. play on her Nintendo DS) my daughter did ask another difficult question – why was there a giant gate in the wall? Upon reflection I could not think of a likely scenario where the natives would build such a gate, actually wanting to allow a murderous giant gorilla access to their village. I think my failure to answer this question was the last straw. 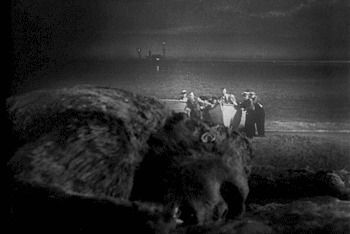 “Okay, two of you take the head, the others, take the legs. I’ll supervise.”.

If she had stuck around she might have also asked some other tough questions. Why did Carl Denham not try to film the dinosaurs? More bafflingly, how the hell did a few exhausted sailors manage to lift the sleeping Kong onto the boat and keep him subdued all the way back to New York?

The fact that the movie makers were adventurers themselves is apparent. Despite the fact that the voyage to Skull Island and the subsequent Broadway exhibition result in countless deaths and devastation, Carl Denham’s actions are not condemned by the writers – the love story at the centre of the film makes it all worthwhile. The film was not made by cautious men, so it never preaches against daring.

As the audience, we love this movie because of the empathy we feel for Kong, who is more victim than villain. Like Karloff’s Frankenstein’s monster, Kong was conceived as a villain, but emerged as a hero. The animators created a fantastic creature who is at times more expressive than the human actors in the film. We forgive him when he tramples on a native or drops a screaming brunette from a skyscraper. The scene where Kong peels off Ann’s clothes and sniffs her female scent is especially significant, it shows us that his love for Ann is not platonic, but a raging passion, rooted in a savage need to possess her.

Just try not to think about the racist subtext.

King Kong in 30 seconds with bunnies:

Top Ten Movies if Kong really was the King:

10. Sex, Lies, and Videoed Apes
9. A Clockwork Orangutan
8. Bulletproof Monkey
7. A Fistful of Bananas
6. Any Gibbon Sunday
5. The Chimp
4. Saving Primate Ryan
3. Throw Marmoset from the Train
2. Gorilla, Interrupted
1. Planet of the Humans

Back up to Classic Horror Movies