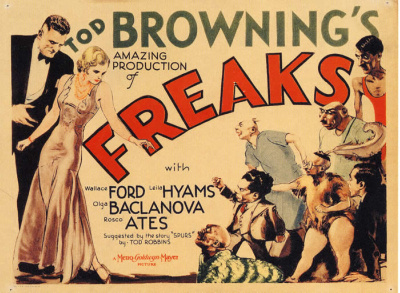 Freaks is a jaw-droppingly bizarre movie that has to be seen – and seen several times – to be believed. It is the story of a group of circus freaks, in which a midget falls in love with a manipulative trapeze artist, to the dismay of the rest of the clan.

Most of the cast are genuine “freaks” – lots of people with learning disabilities, physical disabilities and birth defects, including siamese twins, a half-man/half-woman, a man with no legs who walks on his hands, and a man who is just a torso and head.

At times this movie is funny and poignant, at other times creepy and horrific.

I know it is a well-worn phrase, but this time I promise you it’s true – they REALLY don’t make movies like this any more!

Trapeze artist Cleopatra thinks it is funny when the midget Hans falls in love with her. At first she encourages him for her own amusement – laughing at Hans behind his back with the strongman Hercules, her lover. However, when she learns that Hans has a large inheritance, she decides to marry him.

The other sideshow performers hold an initiation ceremony where they chant “One of us! Gooble gobble, gooble gobble! We accept her!” The ceremony frightens the drunken Cleopatra, and she (ahem) freaks out, revealing her affair with Hercules.

When Hans’s friends also learn that in fact she is poisoning Hans, they attack Cleopatra and mutilate her, turning her into a freak, like them.

Some of the acting is undeniably poor, but you have to forgive this because most of the cast are not professional actors. The thought occurred to me that it would probably be more enjoyable if you didn’t speak English and you watched it with subtitles – you might not notice the bad acting so much.

My favorite scenes were the ones that had little to do with the plot, when we see the circus members in their day-to-day life: the pinhead children playing, the love-lives of the Siamese twins, and the human torso lighting a cigarette just using his lips (apparently there is a lost deleted scene where he also rolls the cigarette!)

The central message, that freaks are human just like us, is undermined somewhat by what happened to Cleopatra. Just think for a moment about what they must have done to her, using knives, saws, stitching, and a certain amount of surgical knowledge. It must have taken hours, as she screamed and pleaded with them – no human I know would have been capable of that. Some critics say the ending was the way it was because MGM wanted the film to be a horror movie, and without that ending it was just a melodrama. Other critics see it as the resolution of an old-fashioned morality play. Whatever your view, you have to agree it is a suspenseful and memorable ending.

The original version of this film shocked and appalled viewers in the test screening, and for the full release several scenes were cut and have since been lost. These include more footage of Cleopatra’s mutilation, and a gruesome sequence showing Hercules being castrated.

Even with these cuts, the film met with public and critical revulsion, and was banned for many years. It became a cult classic though, when fans of the movie took it on roadshows in tents and burlesque houses.