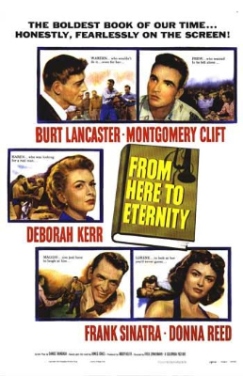 From Here to Eternity stars Burt Lancaster, Montgomery Clift, Deborah Kerr and whats-her-name out of It’s a Wonderful Life. It is set at an army base in Hawaii in 1941, beginning a few days before the Japanese attack on Pearl Harbour.

Montgomery Clift plays a soldier who incurs the wrath of his commander when, for personal reasons, he stubbornly refuses to join the boxing team. Burt Lancaster plays a sergeant who has a far nicer time rolling round in the sea and sand with the commander’s wife. There are a lot of other familiar faces too.

From Here to Eternity is based on James Jones’s best selling novel of the same name, which was based on Jones’s own war experiences at Pearl Harbor. The movie won eight Academy Awards, including Best Picture.

Click below to watch the trailer:
(If you cannot see the trailer for From Here to Eternity below, your browser may need adjusting) 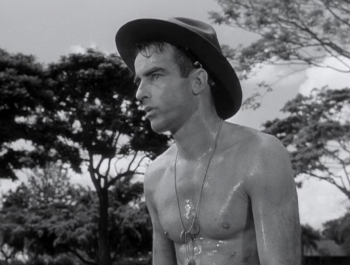 From Here to Eternity begins with the arrival of Private Prewitt at Schofield Barracks on the island of Oahu, Hawaii. He has been transferred to “Company G”. Prewitt’s reputation as a talented boxer has preceded him, and before long Captain Holmes is trying to persuade him to join the regiment’s boxing team. The Captain even offers Prewitt a promotion if he helps them win the tournament later that year. Prewitt however, declines. He reveals that he once seriously injured a friend of his during a sparring match, and has vowed that he will never box again. Captain Holmes refuses to take no for an answer, and, at Sergeant Warden’s suggestion, instructs the non-commissioned officers to make Prewitt’s life as difficult as possible until he agrees to box.

Prewitt’s torments begin. At first his only allies are Private Maggio, and Lorene, a nightclub hostess he has met. Eventually though, he wins the respect of Sergeant Warden, and the two become friends.

Sergeant Warden, meanwhile, has begun an affair with Captain Holmes’ neglected wife Karen. Karen wants to leave her husband, but fears that the Captain will be angry and take it out on Warden. She suggests that Warden apply for officer training, so that he is outside of the Captain’s influence. At first Warden agrees, but eventually admits to her that he does not want to be an officer, and Karen sadly ends the affair.

Eventually, the base commander finds out that Holmes is abusing his authority, and forces him to resign. Things are briefly beginning to look better for Prewitt, until he finds his friend Maggio dying. Prewitt seeks out the man responsible, “Fatso” Judson, and kills him. Injured and wanted for murder, Prewitt turns to Lorene for help. 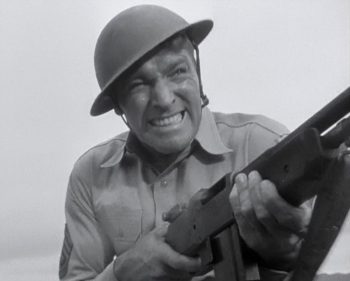 Suddenly, the Japanese attack on Pearl Harbour begins. Japanese planes drop bombs on the base, and the Americans, caught completely by surprise, do their best to fight them off. Sergeant Warden in particular makes a spirited defence, and leads his men well. Prewitt meanwhile, hears of the attack on the news, and although he is in no condition to fight, he attempts to sneak back into the base to help his comrades, but is shot by a sentry who mistakes him for one of the enemy.

The movie ends with a chance meeting a few days after the attack, between Lorene and Karen, on a ship leaving for the mainland. Both are heartbroken, but they are moving on with their lives. Lorene tells Karen that her fiancé was an air force pilot shot down in the attack; Karen recognizes Prewitt’s name, but she says nothing.

Will you please lower your voice, people are staring. This is a nice restaurant and nobody wants to hear us screaming at each other.

Look, I really do not want to get sucked into this argument again.

Why not? Because it is a stupid argument, that’s why not. Nobody with any intelligence thinks “Pearl Harbour” is a better film than “From Here to Eternity”. Let’s just leave it shall we? What do you want for your starter? The scallops are good, I had them last time.

No I wasn’t trying to say that you are stupid, but that is what everyone here will think if they hear you trying to argue that Ben Affleck is has more on-screen presence than Burt Lancaster. Have you decided what you want to order yet? The waitress is coming over.

F*ck the waitress? Don’t tempt me. I cannot believe that you … oh no, everything is fine thanks. My girlfriend is just under the delusion that the bigger a film’s special effects budget is the better it must be. Can we have a few more minutes please? Thanks.

Oh come on! That Frank Sinatra mafia story is just an urban myth and you know it.

For pity’s sake woman, Pearl Harbour was an atrocity! It was the biggest attack on American values since…well…since Pearl Harbour! Have you really forgotten the horrific love triangle? The problem…

Are you going to let me speak or are you just going to screech your ill-informed opinions to everyone in the restaurant. That couple over there are laughing at you by the way!

Can I have the bill please. 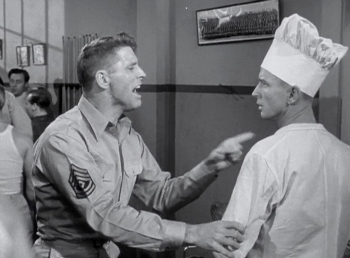 This scene in the movie is believed to have inspired Gordon Ramsay’s entire career.

Back up to War Movies