It begins as a sentimental story, so sweet and wholesome it makes It’s a Wonderful Life look like Raging Bull. But there are some surprising turns, and the second half of the movie is poignant and powerful.

Click below to watch the trailer:
(If you cannot see the trailer below, your browser may need adjusting)

Goodbye Mr Chips begins with Chipping as a young rookie Latin schoolteacher. He finds his job difficult. Over the years he remains awkward and unpopular, and as he enters middle-age he is still being overlooked for promotion. It is a this point however, that he meets the attractive and glamorous Katherine while on a walking holiday in Austria, and they marry.

Katherine moves to the school where she charms everyone around her, and before long people are seeing “Mr Chips” in a different light. He gains confidence, and becomes the most popular teacher in the school, before being promoted to housemaster. However, soon after this, Katherine dies in childbirth.

The story then skips ahead to Chipping in his old age. He retires just as World War I is about to break out, but is soon asked to come out of retirement to become headmaster, as all the young teachers have joined the army. He accepts, and from that post he finds himself watching powerlessly as his beloved boys grow up and are sent off to be slaughtered in the trenches. His only role seems to be to announce their deaths in school assembly. He does however get a chance to show the boys the meaning of courage when the school is attacked in a bombing raid.

Years later, on his deathbed, he overhears a remark that it is a shame he had never had children. Chipping replies:

Goodbye Mr Chips starts off a little depressing – he’s a doddery old man falling asleep in his chair (although actually that chair did look pretty comfy), then he’s a silly young man bullied by the kids, then he’s overlooked for promotion…but then he meets Kathy, and everything changes. Just when you think the movie is going to become a feel-good love story though, Kathy dies, then the war starts, and things really go quite dark.

The scene that gave me a lump in my throat was when the boys first heard that Kathy was dead. Even though there was some shocking acting from the children, and it featured the lamest April Fools joke of all time, I can just imagine a 1939 cinema audience sat in silence as they watch it, fighting back the tears.

And even though the boys in Goodbye Mr Chips are among the most annoying children in cinema history (they say things like “I never heard such beastly rot”) it is still powerful when we hear about them being killed in the war a few years later; to us, as to Chipping, it does not feel as if grown men are dying, but schoolboys.

One thing about this film that worries me though, is the effect it has had in the real world. I wonder how many young idealists watched it and decided to become teachers, only to have nervous breakdowns years later, after being ridiculed and abused by kids who, for some reason, did not laugh hysterically at the Lex Canuleia joke. 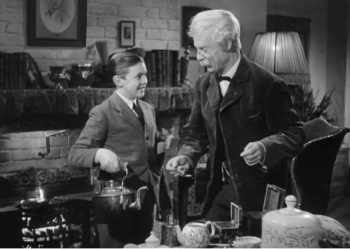 The other sad thought that occurred to me, was that if Chipping were around today, and he lured young doe-eyed boys into his home with the offer of tea and cakes, he would sooner-or-later be accused of being a paedophile. He would be asked to resign quietly, and never be spoken of again. Goodbye and good riddance Mr Chips.

Goodbye Mr Chips is certainly one of the finest movies about a school, but there are many others.  Here are just a few: