Ice Cold in Alex (or Desert Attack, as it was known in the USA, in a heavily edited and far inferior version) is an exciting and inspirational war movie.

It tells the story of the crew of a military ambulance in North Africa, desperately trying to make it to the safety of Alexandria. There are scenes of drama, comedy, and unbearable tension, all set against the authentic backdrop of the North African desert during world war two.

It stars the great English actor John Mills, and the lovely Sylvia Syms.

One piece of advice for you, when you watch Ice Cold in Alex, make sure you have a cold beer handy – at the end of the film you will need it.

Click below to watch the trailer for Ice Cold in Alex: (If you cannot see the trailer below, your browser may need adjusting)

“If you two don’t stop asking Are we Nearly there yet I will turn this ambulance around!”

In the opening scenes, the North African town of Tobruk is evacuated because of news the Germans are advancing. Captain Anson, a burnt out alcoholic, drives an army ambulance. Anson, along with Sergeant Pugh, and two nurses, joins the convoy to Alexandria, but they separated from them following an enemy attack. The ambulance crew must make their own way to safety, negotiating minefields, quicksand, mechanical failures, German soldiers, and the relentless heat.

On their journey, they pick up a South African soldier, Captain van der Poel. He pays for his passage by offering to share his gin with Anson. At first, Anson is happy to accept the offer, but when one of the nurses is killed by German fire, he realizes everyone is depending on him. He vows that the next drink he will have will be an ice cold beer in Alexandria.

He had a dilemma. Should he tell them that he had had the hand-brake on for the past twenty minutes, or just quietly take it off and say nothing?

Van der Poel meanwhile, has been acting suspiciously. He has something in his backpack that he does not want anyone to see, but he convinces German soldiers to let them pass by showing it to them. Eventually, Sergeant Pugh discovers that it is a radio transmitter, and tells the others that van der Poel is a German spy. They do not confront him yet though, realizing that they might still need his help in crossing the desert – they even save his life when he falls into quicksand. This proves to be the right thing to do, as van der Poel’s strength is crucial when they face their final challenge – rolling the ambulance up huge sand-dune using the starter handle (twice!).

Probably the best beer ad in the world.

The crew make it to Alexandria, where they do indeed have the beer they have been dreaming of for so long. Then, they turn the spy over to the military police. However, because of the bond between them, and respect they feel for him, they do not reveal him as a spy, but say that he surrendered to them – that way he would be held as a prisoner of war rather than executed.

I don’t think that anybody in the last fifty years has actually seen this film from the beginning. It is one of those films that is often on TV on Sunday afternoons, and people stumble across it half way through and find themselves unable to turn it off.

And what a great film it is! The courage and resilience these characters show make me feel rather ashamed of the way I panic a little whenever I find myself outdoors in sunny weather without access to a hat. Ice Cold in Alex shows us how we can accomplish anything if we are determined enough, and it shows us the importance of putting the handbrake on when we park on a hill. 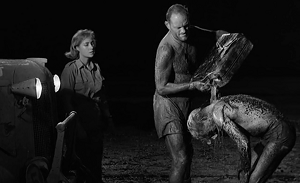 Surely that is dangerous when stood so close to someone as hot as Sylvia.

Did you notice how everyone gets dirty, sweaty, and smelly, except the lovely Sylvia Syms? While the men are wallowing about in quicksand and washing themselves in petrol, Sylvia considers her appearance, and stays well out of the way. Sensible girl. Have I mentioned how lovely I think she is? 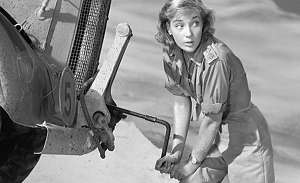 Sylvia cranks up the tension

Back to War Movies