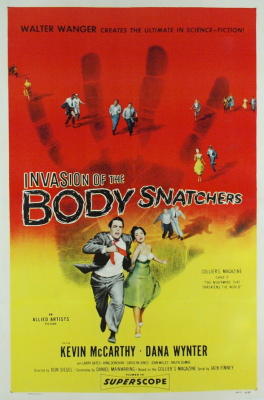 Invasion of the Body Snatchers is a tense sci-fi thriller.

People are behaving strangely in the small town of Santa Mira, and the local doctor begins to suspect that they have been replaced by doppelgangers.

Based on a novel by Jack Finney, this classic movie has been remade and reimagined several times over the years. The 1978 version “Invasion of the Body Snatchers” was a (very good) remake set in San Francisco with Donald Sutherland. In 1993 director Abel Ferrara made a horror version called “Body Snatchers”. In 2007 there was yet another remake called “The Invasion” starring Nicole Kidman and Daniel Craig, which was a box office failure. There have also been a number of other movies inspired by the main premise of Invasion of the Body Snatchers, such as 1998’s “The Faculty” which had a high-school setting. The original has aged well though, and is worth seeing whether you have seen those other movies or not.

Click below to watch the trailer for Invasion of the Body Snatchers:

Dr Miles Bennell has been arrested on a California highway. He appears paranoid and delusional, so has been taken to the local hospital. There, he tells his story to the psychiatrist, and we see it in flashback.

“You idiot! BYOB stands for Bring Your Own Bottle.”

Several days before the arrest, Miles, a local doctor in the town of Santa Mira, had returned from a medical convention. He discovered that a number of his patients were making claims that some of their family members had been replaced by cold and unfeeling impostors. At first, Miles dismissed it as mass hysteria, but then he received a call out to the home of Jack and Teddy Belicec. They had discovered a body in their poolroom – a humanoid, but with vague features and no fingerprints. Together they deduced that it was a partly formed clone of Jack, which was intended to replace him.

Miles, suspecting that his girlfriend Becky might be in danger, went over to her house to check on her. Sure enough, he found another clone growing in the basement. He notified the authorities but nobody would believe him, and all the bodies had vanished. 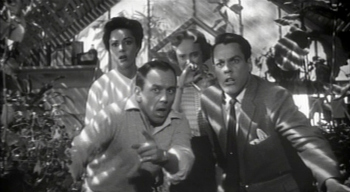 “My god! What are those two girls doing with that one cup?”

The next day, Miles, Becky, Jack and Teddy discovered the source of the clones – giant seedpods growing in the greenhouse. They attempted to spread the word but soon realized they could trust no-one, as many of the townspeople had already been replaced. Miles and Becky went into hiding together, and witnessed the clones making plans to spread the pods across the whole world. At one point they were captured, and the clones explained that the pods grew from seeds that came from outer space. The clones wanted Miles and Becky to go to sleep, because that was when the transfer would take place, but they escaped.

Miles and Becky went into hiding again. However Becky fell asleep, and was replaced by a clone. Miles, distraught and desperate, wandered onto the highway and shouted incoherent warnings to passing drivers, before he was picked up by the police.

Fare-dodging on trains was more difficult in the days when the toilet doors had windows in them.

A great film, well paced with the tension building perfectly – from suspicion and dread, to all-out panic.

The acting is good, and Dana Wynter is very easy on the eye. She is so lovely I can easily forgive Becky for:

Miles: Whatever happens, act calmly. Our lives depend upon it.
Becky: OH NO! THAT POOR LITTLE DOG IS ABOUT TO GET RUN OVER!!!
Miles: Dammit.

What is harder to forgive, is the way the makers of Invasion of The Body Snatchers took so much care defining the rules for how the cloning process works, only to completely disregard them when Becky becomes a pod person. Why did no-one point out to the script writer that there was no pod in the tunnel, and Becky was not asleep long enough anyway? There was no cloning process, and no clone body – Becky just seems to have spontaneously become an alien. I am sure you noticed this for yourself and don’t need me to point it out.  It is actually one of the most famous continuity errors in the world of sci-fi movies.  Having thought about it though, I think there is actually a plausible explanation, and I would like to put it forward to you; perhaps, when Becky fell asleep, she dreamed she became a pod person. When Miles woke her up, she blabbed out the first thing that came into her head (she has a bit of previous for that sort of thing, as mentioned above) and Miles did not give her a chance to come to her senses. Unfortunately this is just a theory – I have checked the DVD and there is no deleted scene showing Miles running off screaming hysterically, tragically unaware of Becky saying to herself seconds later “Oh, hang on, maybe it was just a dream.” 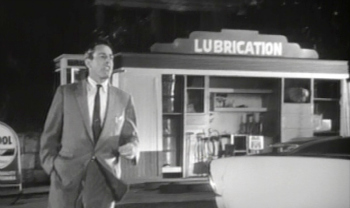 “Great news honey!  They had a sale on.”

Back to Old Science Fiction Movies