It’s a Wonderful Life is a heartwarming fantasy – one of the most well loved films ever made.

It is the story of a suicidal man, who is rescued by an angel who shows him that his life has not been a waste after all.

Frank Capra directed this masterfully crafted exercise in sentiment, and the great cast includes Donna Reed, Lionel Barrymore, and of course, the great James Stewart, in the role that he will always be remembered for.

The main “device” of the film has been copied many times over the years by TV shows and movies, such as Star Trek, Dr Who, Shrek, Dallas, and Buffy the Vampire Slayer. The original is the best though. There is good reason this is still so popular nearly seven decades after it was made.

Click below to watch the trailer:
(If you cannot see the trailer below, your browser may need adjusting)

It’s a Wonderful Life is all about George Bailey. It begins by telling us that George is in trouble, then tells us his life story in flashback 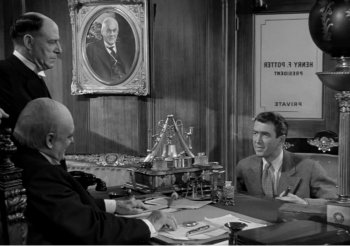 “No Jenkins, I told you to get me a small Bailey’s!”

The movie shows us several incidents from George’s childhood, including the time that he saved his brother Harry from drowning, and the time that he saved Mr. Gower the local pharmacist from making a fatal drug error. We learn that he sacrificed his own education for that of his brother, and that he married his childhood sweetheart, Mary, with whom he raised four children. We also learn how he always wanted to travel and see the world, but stayed in Bedford Falls to run the savings and loan – the only thing protecting the townsfolk from avaricious property owner and slumlord Henry Potter.

One Christmas Eve, George’s absent minded Uncle Billy accidentally loses $8000 of the savings and loan’s money on the day that the bank is to be audited. George searches for the money frantically, to no avail. Eventually, he finds himself on a bridge, and decides to commit suicide by jumping into the river, hoping that the insurance money will pay off the debt.

George is saved however, by Clarance Oddbody, an angel sent by heaven, who is trying to earn his wings (actually, Clarence botches the rescue and George ends up saving him). In order to prove to George that his life has been worthwhile, Clarence shows him an alternative world – one where George had never been born. In this world, Harry is dead (as are all the people he saved in the war), Mary is a lonely spinster, and Mr Gower is a drunk – racked with guilt for the fatal drug error he made. Also, the town is now effectively owned and run by Mr Potter, and it is an unpleasant, corrupt place.

When George returns to reality, he rushes back to his family. There, he learns that the town has actually come together to help him, and offers of money to keep the savings and loan afloat come from all directions. Surrounded by love, George is filled with a new appetite for life, and we realize that Clarence has succeeded in his mission.

It’s a lovely thought isn’t it? That the everyman who thinks his life is a failure is really very important after all? Yes, it’s very nice. Of course if, like me, you have never saved the life of a future war hero, or single handedly saved a small town from an evil Dickensian capitalist, then your guardian angel is going to have to take a different approach if you ever decide to end it all.

I wish real life was a wonderful life.

It’s a Wonderful Life has some very dark moments. George, the nicest man in the world, is pushed so far that he becomes selfish, abusive, despairing, and suicidal. His nightmarish alternate reality – Pottersville – is gloomy and oppressive, with a hint of film noir. Capra showed his genius though, in the way he balanced this perfectly with the light – sentiment, comedy, and the simple message that friendship and family are all a man needs.

Back to Christmas Movies