Metropolis is an epic science-fiction masterpiece about social unrest, mad scientists, and evil androids, set in a huge futuristic city. It is probably the most well-known silent movie ever, and was by far the most expensive movie ever made at the time.

Not all modern viewers are going to enjoy this film. Some are going to be unimpressed with the story, the acting, and the special effects, and claim that modern movies are better in every way. Comparing Metropolis to a modern sci-fi blockbuster though, is like comparing the pyramids to the Empire State Building. True, the pyramids do not have air conditioning, or an elevator, or coffee machines on every floor – but they still look great, and you have to respect that they were an amazing achievement.

I found the story and the spectacle of Metropolis more than enough to hold my interest when I watched it again recently, but not everyone is going to want to sit through a silent movie for (depending on which version you watch) 2 hours or more. I have a friend who said he only had an hour to spare, so watched it on fast forward “x2” and enjoyed it very much. As a serious film critic though, I could not possibly recommend you do that.

There are a few versions of this movie around. Several edited versions have running times of about 90 minutes. However, the restored version seems to be the most popular at the moment, which runs at about 2 hours and includes scenes that had previously been deleted. It is true that this version makes a bit more sense than the edited version, but it is rather long-winded. There is actually an even longer version (approx 2 hours 30 minutes) which includes some recently discovered deleted scenes, which I have not seen, and do not like the sound of to be honest. Finally, I should mention that there is also a 1980s colorised version with a pop soundtrack by Giorgio Moroder – and I have to admit I have a soft spot for that version.

(If you cannot see the trailer below, your browser may need adjusting) 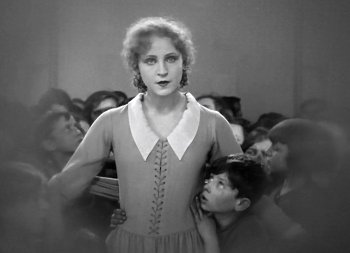 In Metropolis, the poor live in “the depths” and work the machines, while the rich live lives of luxury in the skyscrapers above. Freder is a rich playboy. One day he sees a young woman from the depths and he falls in love with her. He goes beneath the city to search for her, and discovers that her name is Maria, and she is in fact the leader of a cult-like political movement that aims to improve relations between the “head” (i.e the rich) and the “hands” (i.e. the workers). He watches her deliver a passionate speech, in which she tells of her belief that a mediator will come. She refers to the mediator as “the heart”, and Freder realizes that it is him.

“Yes, I put breasts on my robot. What’s your point?”

Unknown to Freder, his father Joh, ruler of the city, has had him followed, and he has learned of the existence of Maria and the cult. Joh visits the scientist Rotwang, who has built an android. He persuades Rotwang to make the android into a duplicate of Maria, and to program it to undermine the movement. Rotwang however, driven by his hatred of Fredersen (they were once rivals for the love of Hel, Freder’s mother), goes a step further and secretly programs the android to create chaos.

Soon, thanks to the Maria android, the workers are rioting, and they start destroying the machines. The power goes out in the city, and the reservoir bursts its banks, flooding the depths. Freder and the real Maria, working together, save a group of children from drowning, while the parents are rioting above. The parents though, believing the children dead, turn on their Maria and burn her as a witch. When her mechanical nature is revealed, and the real Maria reappears (after Freder rescues her from the demented Rotwang), the violence stops. 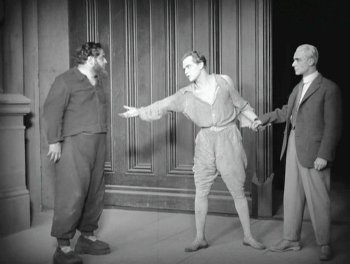 Joh, who has witnessed the rioting and the near-death of his beloved son, is in a state of shock. His hair has turned white. Momentarily vulnerable, he is approached by the leader of the rioters. At first they do not know what to say to each other, but then Freder steps up, and fulfils his destiny by becoming their mediator.

Let’s face it, the silliness of the plot and the overacting (even by 1927 standards) are a little too much. Apparently the fact that the “science” would not really work irritated H.G. Welles so much at the time, that he made the more realistic (and sadly, more boring) “Things to Come” in response.

However there is a greatness to the way Metropolis has been made – the huge sets, the choreographed workers, the images of the city – that makes it possible to forgive its shortcomings. 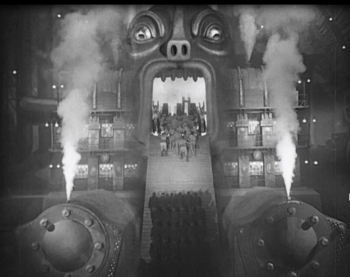 “We need a better union”