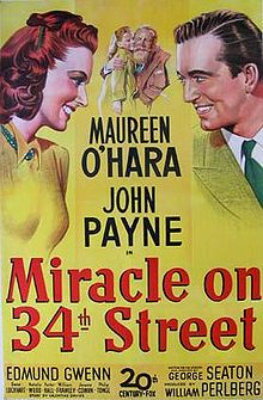 Miracle on 34th Street is the story of a sweet old man with a white beard who gets a job as a department store Santa Claus in the run up to Christmas. Before long, he is causing controversy, by claiming that he is in fact the real Father Christmas.

This is a sentimental film that teaches us about love, faith, and of course, the true meaning of Christmas. However it does it with enough humor and style for it not to seem too cloying. It also features a fine Santa Claus in Edmund Gwenn, and, unusually for the day, a child star who could actually act (Natalie Wood).

Miracle on 34th Street was successfully remade in the 1990s. I think most young people will prefer the pace and humor of the remake, but there are definitely aspects of the original that are better than the 1990s version, and for that reason the original is still well worth watching.

Click below to watch the trailer:
(If you cannot see the trailer for Miracle on 34th Street below, your browser may need adjusting)

Santa Claus: (noun) Fat northerner who spies on your children and breaks into your home once a year, but in a good way.

Miracle on 34th Street begins with an old man who calls himself “Kris Kringle” watching a thanksgiving parade in New York City. He notices that the Santa Claus on one of the floats is drunk, and informs the event director, Doris Walker (from Macy’s Department Store on 34th Street). At Doris’s request, Kris replaces the inebriated actor on the float, and he does such a good job he is offered the role of store Santa at Macy’s over the Christmas period.

Kris excels as store Santa, being a hit with children and parents alike, especially when it is revealed that his is multi-lingual and can talk to children who do not speak English. However, when he starts advising parents that certain toys which Macy’s do not stock are available in other stores, Doris panics, and thinks she will have to fire him. Kris’s refreshing honesty proves so popular with Macy’s customers though, that the store’s senior management decide to adopt it as their store policy, and it becomes a great sales gimmick. 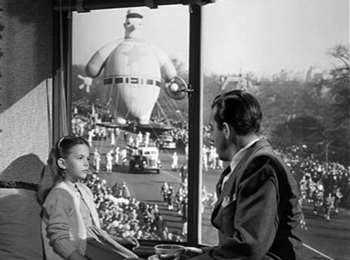 While working at Macy’s, Kris lodges with Fred Gailey, a lawyer, who is Doris’s neighbor, and who is clearly trying to woo her. Kris also spends some time with Doris’s six-year-old daughter Susan. When Susan tells Kris that she does not believe in Santa Claus, Kris informs her that not only does Santa Claus exist, but that he is in fact the real Santa Claus himself. When Kris repeats these claims directly to Doris, she becomes worried about his sanity, and arranges for him to have a psychiatric test. The test does not go well for Kris – he inadvertently antagonizes the examiner, Granville Sawyer, who declares him unstable and dangerous. However, Doris gets a second opinion from another doctor who has known Kris for years, and this doctor says Kris is a sweet and harmless old man.

However, Kris and Sawyer soon clash again; Kris accuses Sawyer of exploiting a naive young man at Macy’s, and he hits Sawyer over the head with his walking stick. The angry Sawyer arranges for Kris to face a commitment hearing.

Fred volunteers to defend Kris at the hearing. The case attracts a lot of publicity, and it soon becomes clear to the judge that it would be a disaster for his own re-election campaign if he became known as the judge who ruled that Santa Claus does not exist (and even worse, his own grandchildren would fall out with him). All he needs is a plausible reason to rule in Kris’s favour.

Luckily for the judge, Fred resolves to prove not only that there is a Santa Claus, but that Kris Kringle is the one and only. Firstly he calls to the stand the young son of the prosecuting lawyer. This young boy tells the court that his daddy told him there is a Santa Claus. The prosecutor realizes he cannot tell his son he lied to him, so he has to concede the point. 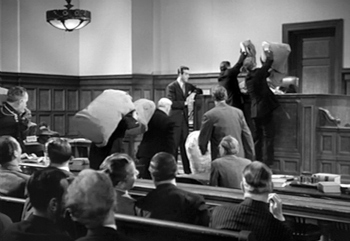 Somebody needs to adjust their spam filter.

Next Fred reveals that since the hearing began, the Post Office (as an excuse to clear out their “dead letter office”) have been directing all the “Dear Santa” letters that they receive to Kris. Fred arranges for the evidence, 21 sacks of mail, to be dumped on the judge’s desk. Realizing that this is the excuse he needed, the judge declares that if the Post Office Department, which is a branch of federal government, recognizes Kris to be the real Santa Claus then he will not contradict them. He orders Kris to be released.

The next day is Christmas Day; Fred, Doris Susan pay a visit to Kris. Susan is a little sad because Kris had promised to grant her her greatest wish – a house and family – but it seems he is not going to deliver. However, on their way home again, following a route suggested by Kris, the trio stumble across a house which is exactly like Susan’s dream house, and is “For Sale”. When Fred proposes to Doris, and suggests that they buy that house together, Susan realizes her wish is going to come true after all. As the movie ends, the camera pans around to reveal Kris’s walking stick leaning against the fireplace.

Miracle on 34th Street was a big hit in its day, but now it has been rather eclipsed by the 1994 remake with Richard Attenborough. I do like the remake, and I think there are several things that it does better: I prefer Attenborough to Gwenn (despite Gwenn having the better beard), and I prefer the sign-language scene to the Dutch speaking scene. Also I was rather taken aback at seeing Santa in the original batter a man with a heavy stick, and I think it was right to remove that from the remake. However, for me, where the remake got it badly wrong, was in changing the ending to the commitment hearing. They took out the brilliant and iconic mailbags scene and replaced it with a toe-curlingly awful scene which made no sense. In the remake a little girl gives the judge a dollar – a reminder that “In God We Trust.” This is supposed to suggest that if people can believe in God then why not believe in Santa Claus? Well, I really do not know where to start with that argument, so I will just say that if I had been the judge, I would have had everyone involved arrested for attempted bribery.

Written and directed by George Seaton

Back to Christmas Movies