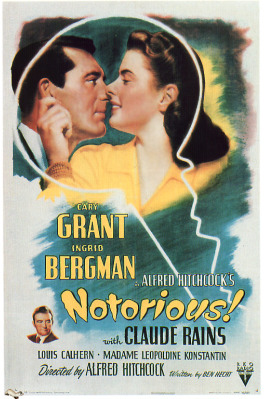 Notorious is a classic Alfred Hitchcock thriller, and is well worth watching. It is well made, with a great cast – Cary Grant and Ingrid Bergman are spies investigating a suspected Nazi played by Claude Raines.

Full of drama, romance, sinister characters, and unlikely plot developments, it is regarded as one of Hitchcock’s best early films. There are some great scenes of unbearable tension in the second half of the movie.

One final word of warning. An easily confused person arriving at this website might be expecting the film to be the original version of the 2009 film of the same name. This is not the case – the two films have no connection. Hitchcock was a ground-breaking film maker in many ways, but he was not so far ahead of his time as to be able to predict the life story of Biggie Smalls and the East Coast–West Coast hip hop rivalry of the 1990s. He was good, but not that good.

Click below to watch the trailer:
(If you cannot see the Notorious trailer below, your browser may need adjusting) 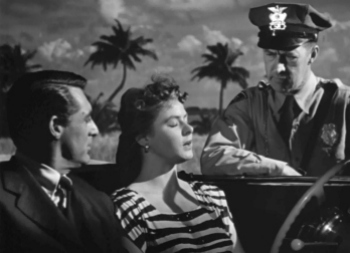 I’m sorry for speeding officer. In my defence I am very, very drunk.

American agent Devlin (Cary Grant) recruits the notorious party girl Alicia (Ingrid Bergman), daughter of a disgraced Nazi spy, to work undercover exposing another suspected Nazi Alex (Claude Raines) in Rio. Before long Devlin and Alicia fall in love, but it soon becomes apparent that the job will involve Alicia sleeping with Alex in order to win his confidence. This puts a lot of pressure on Devlin and Alicia’s relationship, and the romance appears to be over. In fact Alicia goes as far as marrying Alex. 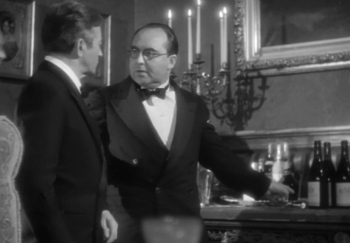 No, you fool! You don’t serve uranium ore with fish!

Alicia is in regular contact with Devlin, reporting back on what is going on in Alex’s household. This includes the comings and goings of a group of Nazis living there, as well as Alex’s sinister mother, and a very strange argument about a bottle of wine. When Devlin hears about the wine, he is intrigued,and asks Alicia to persuade Alex to host a party, so that Devlin can go along and investigate the wine cellar.

At the party, Alicia and Devlin sneak away and make it down to the cellar, where they discover wine bottles filled with a strange substance that they later discover to be uranium ore, used for making nuclear bombs. After the party though, Alex notices that his cellar door key is missing, and becomes suspicious. He discovers evidence that his wine bottles have been tampered with, and when the key reappears on his keyring overnight, he realizes that his wife has betrayed him.

Mummy’s boy. Psychotic mother. Alfred Hitchcock  … sounds like a winning combination to me

Alex knows that his fellow Nazis would kill him if they found out that he had endangered them all by bringing a spy into his home. He and his mother concoct a scheme therefore, to poison Alicia over a period of time, and make her death seem like an illness. Their plan almost works, and Alicia becomes very sick. She suspects the truth but is powerless to do anything about it. When she fails to make the net rendez-vous with Devlin though, he deduces what has happened. He forces his way into the house, confronts Alex, and takes Alicia to a hospital, leaving Alex to deal with the angry Nazis.

Devlin was so pleased with himself for seducing Alicia, he rang his mates to tell them immediately.

I fully expected Alicia and Devlin to fall in love over the course of Notorious, but I was surprised when it happened after just 20 minutes. Devlin’s seduction technique included punching her, telling her that they had bugged her home, persuading her to risk her life as a spy, and coldly telling her that her father had killed himself. The only remotely nice thing he had done was wrap a handkerchief (yes, a handkerchief!) around her one time when she was a bit chilly. As soon as they get to the hotel though, she is drooling all over him as though he is made of chocolate. I guess it must have been the Cary Grant effect – or should we blame it on Rio?

Actually the romance is not the only unconvincing part of Notorious – would Nazis really hide their uranium in wine bottles, and did Alicia really have to marry Alex so quickly? What is great to watch though, is the way Hitchcock builds the suspense in some key scenes in the second half of the movie – the champagne running out at the party, Alex’s suspicions about the key, the zooming in on the coffee cup…tense stuff!

Marsha and Dan were overdressed for the slumber party.