Roman Holiday stars Audrey Hepburn as a princess who evades her bodyguards and goes off for an adventure in Rome. Gregory Peck plays a reporter who befriends her, and in doing so stumbles across the scoop of a lifetime.

This movie would be worth watching for the delightful Audrey Hepburn alone, but it is also funny, bittersweet, and a little exciting too. As well as all that, it is essential viewing for anyone who is planning an actual Roman Holiday any time soon!

I had a holiday in Rome once. I saw all the sites, met some interesting people, and ate some great food. It was spoiled somewhat though when the airline I was flying with lost my father’s coffin. Oh, wait, actually that was Forget Paris.

Click below to watch the trailer for Roman Holiday:
(If you cannot see the trailer below, your browser may need adjusting) 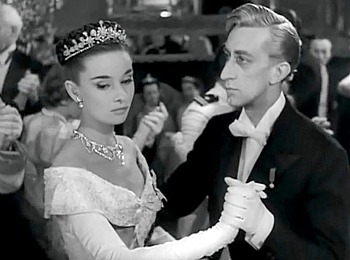 In their hearts, they both knew this was not going to impress the Strictly judges.

Anne, a teenage Princess, is on an official tour of Europe with her aides and chaperons, in order to improve diplomatic relations for her country. By the time they reach Rome she is bored and frustrated with all the stuffy functions – she is so protected that she never sees anything of the places she is visiting. One night she slips away from her bodyguards and goes to explore the city.

For pity’s sake man – eyes on the road!

A reporter, Joe Bradley, finds her asleep on a bench. At first he does not recognize her, but, worrying for her safety, takes her home with him.

The next day, when he realizes who she is, he decides to write a story about her, and arranges a lucrative deal with his editor. Then, not telling Anne that he knows who she is, or that he is a reporter, he offers to spend the day with her, showing her the sights of Rome. He also recruits his photographer friend Irvine to accompany them, and he takes candid photos of their adventures.

That evening they go dancing on a boat, and are spotted by secret service men, who try to escort her back to her people. Joe and Irving put up a fight though, and Joe and Anne manage to escape by jumping in the river. In the aftermath of the struggle, Anne shares with Joe her dreams of living a normal life without the overwhelming responsibilities, and they kiss. However, Anne realizes their relationship cannot go anywhere, and she returns to the emabassy. 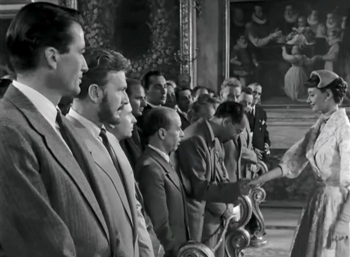 The fingernail inspectors were pleased with what they saw

The next day, Joe decides he is not going to write the story after all. Irving, respecting his friend’s feelings, also decides not to sell his photographs. Instead, the pair attend a press conference that Anne is giving at the embassy. When Anne realizes that Joe and Irving are newspaper men, she is shocked, but quickly composes herself. Even though Joe and Anne cannot communicate properly because of the formality of the situation, they understand each other well, and Irving gives her the photographs he took. Anne declares to the press, and to Joe in particular, that she will cherish the memory of her visit to Rome for as long as she lives. Then, she goes back to her people, and Joe goes back to his.

Roman Holiday begins with the claim “This film was photographed and recorded in its entirety in Rome, Italy”, seconds before the opening shots of Big Ben, Westminster Abbey, and the Houses of Parliament in London. It took a while then for this movie to win back my trust.

Eventually though, I forgot about this dubious start (or at least, I would have done if I had not been making notes) and the movie won me over. Gregory Peck was one of the most likeable movie stars of his day, and Audrey Hepburn was so beautiful, and her character so innocent and without guile, it would be difficult not to fall in love with her. 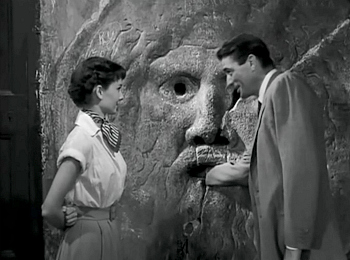 How embarrassing, I thought it was an ATM

It was good to see the sites of Rome too. I went there a few years ago myself, and as I was watching the movie, I was surprised to see how little certain places had changed in over fifty years. Then when I thought about it, they probably haven’t changed much in hundreds of years, or in some cases, thousands!

I thought the ending of the movie was quite powerful. I felt Anne’s suffering as she was moving down the line shaking hands with the reporters, moving closer to Joe, but unable to say what she wanted to say. I imagine many viewers would be willing Anne to shout “to hell with all this” and run off with Joe. The movie “Notting Hill” borrowed the idea for the press conference ending (actually, they borrowed lots of ideas) but they did give the audience the “I’m just a girl, standing in front of a boy, asking him to love her” happy ending. However, I think I rather prefer the poignant ending of Roman Holiday.

Back to Romance Movies