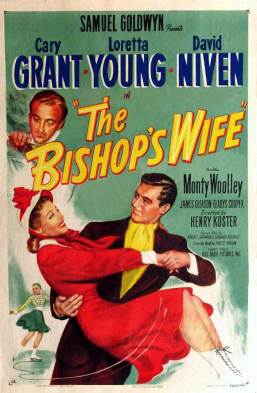 This Chrismas comedy movie was remade as The Preacher’s Wife in 1996, with Denzel Washington and Whitney Houston.  The original, with Cary Grant and David Niven, is tricky to find on DVD, but it regularly appears on TV at some point in the festive season each year, and is well worth a look.

It tells the story of a bishop (Niven) who prays for help in getting funding for building a cathedral.  An angel (Grant) answers the prayer and begins to charm his way into the bishop’s life.  However, the angel does not seem particularly interested in the cathedral; instead, he focuses his attention on the bishop’s neglected wife.

This is a feel-good movie with some warm and funny performances, especially from Cary Grant, who seems to be having a great time, and you cannot help but joining him in it.

New York Bishop Henry Brougham is trying to raise the money to build of a new cathedral, and he prays for divine guidance.  Soon afterwards, the handsome and suave “Dudley” appears and reveals to Henry that he is an angel, sent to help.  However, Dudley’s is not actually interested in the cathedral – he has come to guide Henry spiritually. Henry has become obsessed with raising funds, and has been neglecting his relationships with his wife Julia and their young daughter.

Dudley soon charms all of Henry’s friends and associates, even the non-religious Professor Wutheridge.  He also performs a few minor miracles (such a creating Christmas decorations, and rewriting the bishop’s sermon) and he does manage to persuade wealthy parishioners to make donations, but not for the cathedral;  he persuades them to donate money to the poor instead.

When Dudley turns his attention to Julia though, he actually finds himself attracted to her. Henry senses this and becomes angry and jealous. He tells Dudley’s true identity to Professor Wutheridge, who urges him to fight for the woman he loves. Henry returns home and confronts Dudley.

Dudley appears to want stay on Earth, but Julia tells him to leave.  Dudley leaves, telling the bishop that it is rare for an angel to envy a mortal before erasing all memory of himself from the bishop and his wife.

Later that night, it is Christmas Eve, and Henry delivers the sermon that he believes he has written, but was actually written by the angel, while Dudley watches from the street, smiling.