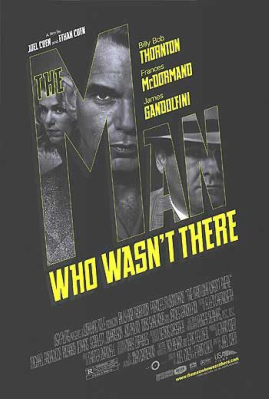 Recommended by Daniel, Cheltenham, UK
The Man Who Wasn’t There is a modern film noir directed by the Coen Brothers. Although it’s one of the Coen Bros’ most recent films, and stars several well-known actors (Scarlett Johannson, James Gandolfini and Billy Bob Thornton), I don’t hear much mention of this film anymore.

I think I’m a pretty picky filmwatcher but I particularly enjoyed this. The black and white format really suits the tone of the film very well.

In fact, writing this has reminded me of how much I liked the film…must go and dig a copy out and watch it!

SPOILER ALERT: The plot summary and comments below contain details that might spoil your enjoyment of the movie if you have not already seen it

This is well-made film noir by people who clearly love the genre. Great to see modern-day stars like Billy Bob Thornton and Scarlett Johansson in such an old fashioned style – it makes it seem really fresh.

Plot:
Crane is a quiet, detached man, who works in a barbers shop. He rightly suspects that his wife is having an affair with local gangster “Big Dave“, and when a business opportunity comes his way, he decides to raise the money by blackmailing his wife’s lover. The gangster finds out that Crane is behind the blackmail though, and becomes violent. In self defence, Crane kills Big Dave. However Crane’s wife is arrested for the murder, and despite Crane confessing and hiring the best lawyer in the state, his wife commits suicide. Feeling guilty, and more detached from the world than ever, Crane attempts to do something decent by helping a young pianist who lives nearby with her musical career. That ends badly too though, when the young girl misunderstands his intentions, and makes an unwelcome sexual advance. Then things become even worse, and Crane is arrested for murder; but it is not the murder of Big Dave he is charged with, it is one of Dave’s victims. Abandoned by his expensive lawyer, Crane pleads guilty, and is sent to the electric chair.