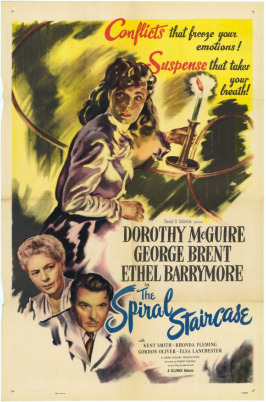 The Spiral Staircase tells the story of a pretty young mute woman working as a servant in a magnificent old Gothic mansion, who finds herself the intended victim of a serial killer.

Both this film and the novel it was based on are rather forgotten now, but we caught it on TV one evening recently, and loved it. We recommend it, if you can find it.

A string of murders in a small New England town suggests that there is a serial killer at large, targeting women who have disabilities or afflictions. Dr Parry suspects that his attractive young patient Helen, who has been mute since a childhood trauma, might be the next victim. His instincts appear to be correct as we see a shadowy figure stalking her back to the decaying old mansion where she works.

Inside the mansion, as a storm rages outside, we are introduced to the head of the household Professor Warren, and also his bedridden stepmother, his stepbrother Stephen, and the small team of servants. Smirking stepbrother Stephen has recently returned from Europe, and has already seduced Bridget, the professor’s secretary (to the Professor’s irritation). When the police question him about his whereabouts at the time of the latest murder, he lies.

Dr Parry visits the house to warn Helen of the danger again, and to offer to take her to Boston to see someone who might be able to cure her condition. The invalid mother also seems convinced that Helen is in danger, and this appears to be confirmed when we overhear a servant remarking that a window has been found open. Is the killer in the house?

Bridget and Stephen quarrel, and Bridget decides to go to Boston with Helen. When she goes down to the cellar to get her suitcase though, she is attacked and strangled. Helen finds her body, and a few seconds later, Stephen appears. Suspecting him to be the killer, Helen locks him in the cellar, only for the real killer to reveal himself – Professor Warren. The Professor chases Helen around the house, but is saved when Mrs Warren appears at the top of the spiral staircase, out of her bed for the first time in years – she shoots the professor, before collapsing herself. Helen’s voice returns to her just in time for her to phone the doctor.

The winners of the Ricky Gervais / Stephen Merchant / Karl Pinkington lookalike competition had mixed feelings about their success.

Square-jawed Dr Parry, who has all the personality of an Excel spreadsheet, seems likely to become the film’s hero, but as it turns out he does not have much to do in the way of heroics. Instead it is the little old woman who saves the day. Of course, when she casually mentioned earlier in the movie what a good shot she was, that did rather telegraph the ending.
I think most people will have guessed the identity of the killer. Once you eliminate Stephen for being too obvious, there are not many other possible suspects. One big clue for me though, was Professor Warren’s moustache. He must have spent hours getting it to look that neat – clearly the actions of a psychopath.

There are some splendidly silly scenes and unexplained red herrings: