To Kill a Mockingbird is a charming, funny, and powerful movie. It is an adaptation of Harper Lee’s novel of the same name, which is based on events from her childhood in the deep south in the 1930s, and the hero, Atticus Finch, is based on her father. It is one of the most loved and respected novels of all time.

Atticus Finch (Gregory Peck) is a lawyer who becomes involved in a rape trial, where things are not as they first seem.

It is the story of a man who stands up for what he believes in, as seen through the eyes of his six year old daughter. It is a story about innocence, parenthood, courage, prejudice, and evil.

To Kill A Mockingbird is superbly acted, brilliantly directed, and rightly regarded as a masterpiece. Everybody should watch this film.

Click below to watch the trailer:
(If you cannot see the trailer for To Kill A Mockingbird below, your browser may need adjusting) 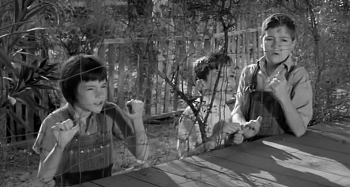 Scout and her older brother Jem pass the time one hot summer playing games and getting up to mischief. One of their favourite games is teasing each other about the boogeyman who lives in their street – a recluse called Boo Radley who is rumoured to have committed a violent crime many years earlier. Scout and Jem are both afraid of him, but they dare each other to go up to the house. One time Jem does indeed come into contact with Boo, but Boo ignores him. Shortly afterwards though, the children start finding presents left for them in an old tree, presumably by Boo.

Boo Radley is soon forgotten though, when the children’s father, the lawyer Atticus Finch, becomes involved in the biggest scandal the town has ever seen. Atticus has agreed to defend Tom, a black man accused of raping a young white woman. 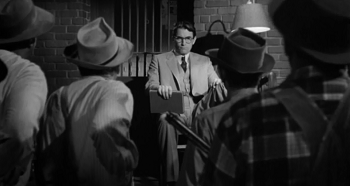 The day before the trial, Atticus announces to his children that he will be spending the night at the courthouse. The children decide to follow him there. They find Atticus sat outside the building as a lynch-mob turns up, determined to kill Tom. Atticus tries to reason with the mob, and says he will not allow them to pass. Just as it seems things are about to turn violent, Scout runs up to be beside her father. Not understanding the mob’s intentions, she greets some individuals she recognises, and chats with them about their own families. Scout’s innocence defuses the situation, and shames the would-be killers, who realize the error of their ways, and disperse.

Where is Henry Fonda when you need him?

The next day what seems like the whole of the town turn up for the trial, and the children also sneak in. The “victim”, Mayella, tells her story, that Tom raped her and beat her. When Atticus cross-examines her though, it becomes obvious that she is lying. When Tom gives his version of events, the truth comes out – Mayella attempted to seduce Tom, but was interrupted by Bob, her father. Furious, Bob beat Mayella and concocted the rape story. However, despite Atticus’s defence, and the lack of any evidence, the jury find Tom guilty. Atticus assures Tom they will appeal, but later that day Tom is shot and killed while attempting to escape.

Several weeks later, Scout and Jem are on their way home from a school pageant, when they are attacked. It is Bob. He has a knife and intends to kill the children as revenge on Atticus, who he hates because of the accusations Atticus made in court. However, the children are rescued when an unseen figure appears and overpowers Bob, killing him with his own knife. It is revealed to be Boo Radley. When Atticus and the town sheriff find out what has happened, they agree to cover up Boo’s involvement, and make it seem as though Bob fell on his own knife in the struggle with Jem.

A lot of people argue that books are better than films. The saying goes that with a book, you can “use your imagination.” Well, that’s nonsense. Do you know what I am imagining whenever I read a book? That’s right…a film!

And this is a great film. Anyone watching it for the first time today would probably be amazed and outraged; firstly at how the story reveals the horrifying truth about racism just a generation or two ago, and secondly at how comprehensively To Kill a Mockingbird has been ripped off over the years by Matthew McConaughey and John Grisham movies.

I managed to put my outrage aside just long enough to marvel at the greatness of Atticus Finch. What a guy. He just does the right thing all the time doesn’t he? He’s a great lawyer and a great man. Also, isn’t he the sort of father we all wish we had, or wish we were? He gives the children his love, and he is there when they need him, and but he gives them freedom to be themselves, and make their own mistakes.

I have heard it said that he gives them too much freedom. A friend of mine said that when he watched To Kill a Mockingbird, part of him was hoping that Boo Radley would strangle the irritating little buggers. However, this friend was having a lot of trouble himself with local schoolchildren at the time, so I do not think his opinion was rational. I wish I had not mentioned it actually.

I have no complaints about Atticus’s parenting skills though…apart from the fact that he gave his son a girl’s name and his daughter a boy’s name. That’s all though. Oh…and the fact that he probably should have picked his kids up himself after the school play, rather than letting them get attacked and almost murdered by the deranged killer he knew was on the loose in the area. Minor quibbles though. What a guy! 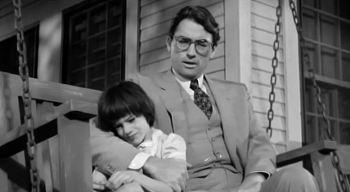 I understand why you are upset Scout, but I did my best. I am a lawyer, not a hairdresser.

Top Ten Bad Reviews for To Kill A Mockingbird:

An all-time great movie based on the greatest American novel ever written? Not according to these guys. Below are some excerpts from genuine one-star reviews of To Kill A Mockingbird (book or film), from Amazon and IMDB. Let us all just take a few moments to consider the opinions of these people who went out of their way to share their insight with the world:

(That last one was me, using a fake name. Ha ha. Take that Amazon!)